Today the Virgin gives birth to Perfect Essence and the earth offers a cave to the Inaccessible. The Angels sing His glory with the shepherds; the wise men journey with the star,  for there is born for us an Infant Child, God Eternal. 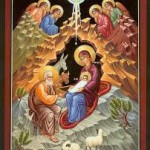 In a sermon on December 20, 386 or 388, St. JohnChrysostom announced to his faithful that, for the first time, the Church in Antioch would celebrate the feast of theNativity of our Lord on the 25th of December, independent of the feast of the Theophany. He added that this feast can, without mistake, be called the mother of all the feasts for from it Theophany, Easter, Ascension and Pentecost have their origin and foundation. If Christ had not been born in the flesh, neither could he have been baptized, crucified, raised from the dead or taken into heaven. From Christ’s Nativity all the other feasts flow like different streams from the same source.
Truly Christ’s Nativity is the most significant event in the history of the human race. This event inaugurated theChristian Era and became the point of reference from which we date the events of world history.
For the first three centuries, Christians did not have a separate feast of the Nativity of Christ. At that time the only feast known, besides Easter, was the Theophany.  It was celebrated on the 6th of January. This feast, since itcelebrated God’s “manifestation” of Himself to mankind, included the Nativity of Jesus, the adoration of the Three Kings, Christ’s baptism, and any other event in the life of Jesus which manifested God’s presence in the world in the Person of Jesus (e.g., the multiplication of the loaves).
St. Clement of Alexandria says that during his time, some regarded the 20th of May as the day of Christ’s birth, others celebrated it on the 6th or 10th of January, butaccording to him it occurred on the 18th of November. St. Cyprian, in the third-fourth century, alluded to the day of the birth of Christ as being the 28th of March.
The fixing of the date of Christmas influenced the fixing of the dates of the other feasts dependent upon it, such as the Circumcision, the Presentation, the Annunciation and the Nativity of John the Baptizer. The Eastern Church slowly followed the example of the Western Church with regards to the separation of the feasts. It seems that Chrysostom is the person who greatly influenced the Eastern Church’s  celebration of the Nativity of our Lord as a separate feast.

In truth we don’t know the date of the Lord’s birth!