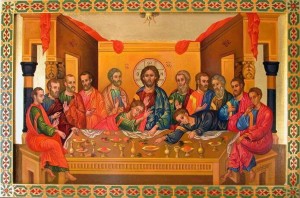 We thank You for this liturgy which You have willed to accept from our hands, even though there stand before You thousands of archangels, tens of thousands of angels, Cherubim and Seraphim, six-winged, many-eyed, soaring aloft on their wings, singing, shouting, crying out and saying the triumphal hymn:

That which immediately follows upon this priest introduction is the Hymn of Victory or Greek: ἐπινίκιος ὕμνος. It is taken originally from the Chalcedonian Christian Liturgy. This hymn is actually a combination of two events, Isaiah’s Heavenly Vision and the Triumphal Entry of Jesus into Jerusalem. In Isaiah 6:1b-4 we read about this vision:

I saw the Lord. He was sitting on a lofty throne, and the Temple was filled with his glory. Hovering about him were mighty, six-winged seraphs. With two of their wings they covered their faces; with two others they covered their feet and with two they flew. In a great antiphonal chorus they sang, “Holy, holy, holy is the Lord of Hosts; the whole earth is filled with his glory.”

This proclamation is also found in Revelation 4:8: “Day and night, without pause they sing: Holy, holy, holy is the Lord God Almighty, He who was, and who is and who is to come.”

We proclaim this hymn together with the Heavenly Host. We believe that as we celebrate on earth, so too our celebration is connected with the same celebration in heaven. There is no separation between heaven and earth as we worship God.