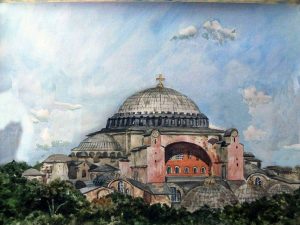 The observance of this feast goes back to the fourth century. At that time, St. Helena, mother of Emperor Constantine the Great, built a church on Mt. Tabor in honor of the Lord’s Transfiguration. At the end of the eleventh century, the Crusaders found several churches and monasteries on Mt. Tabor. In the thirteenth century, however, the Mohammedans came and destroyed them. Cyril II, the Patriarch of Jerusalem, built a new church over the ruins of the ancient church in 1860. In 1923, a magnificent basilica in honor of the Transfiguration of our Lord was built on Mt. Tabor.

This feast began to be solemnly observed in the Eastern Church under the title “The Lord’s Transfiguration” from the sixth century. In Western Syria, in the eighth century, it was call “The Feast of Tabor.”

Originally, the feast was observed in February. However, since this joyful feast fell during the time of the Great Fast, its celebration was not in keeping with the spirit of fasting and penance. Therefore, it was transferred to the 6th of August. Why this day? The historian Eusebius and St. John Damascene are of the opinion that the Lord’s Transfiguration took place forty days before the death of Christ. Thus holy Church, in keeping with this opinion, transferred this feast from the month of February to the 6th of August, because forty days later, September 14th, is the feast of the Exaltation of the Holy Cross – the commemoration of the passion and death of Christ.

From the East, the feast of the Transfiguration reached the West somewhere around the seventh or eight century. Here it came into practice slowly; it was observed at different times and even in the twelfth century was not universally kept. In 1457, Pope Callistus III extended this feast throughout the Western Church and commanded that it be observed on the 6th of August in memory of a victory over the Turks near Bilhorod. This victory took place on the 22nd of July, 1456, but news of the victory did not reach Rome until the 6th of August. The Armenians observe the Lord’s Transfiguration on the 7th Sunday after the Descent of the Holy Spirit.

The feast of the Transfiguration is one of the twelve principal feasts of our Church, having a one day pre-feast and a seven day post-feast. It falls during that time when the fruits of the earth reach maturity. From the earliest times in the Eastern Church, on this day fruit is blessed in thanksgiving to God for the first-fruits of the earth. This custom was adopted by the Christian Church from the Old Testament which prescribed that fruit be brought to the Temple of the Lord. In the book of Exodus we read: “You shall carry the first-fruits of the corn of your ground to the house of the Lord your God.” In the Book of Leviticus we read: “When you shall have entered the land which I shall give you, and shall reap your corn, you shall bring sheaves of ears, the first-fruits of your harvest to the priest.
We bless fruit as is our tradition!