You have  revealed Yourself to the world today, and Your light,
O Lord, has shined upon us. We recognize
You and exclaim to You: “You have come and revealed Yourself,
O Inaccessible Light.” 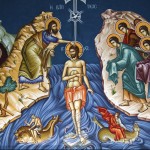 Today we celebrate, as a community, the second greatest feast in our church year. It was the first immoveable feast  (i.e., a feast that occurs on the same day each year) developed by the Church. The feasts of Easter and Pentecost, because they are directly connected to Jewish feasts, are known as moveable feasts. Some believe that Theophany was developed to replace the Jewish Festival of Lights. In the early Church it celebrated all of the various events wherein God manifested Himself through the   Person of Jesus Christ. It included Jesus’ Nativity, the homage of the Wise Men, His Baptism, the miracle at the wedding in Cana of Galilee and the multiplication of the loaves and fishes. The name Theophany must be understood in the plural sense for it means a feast of Theophanies.
This feast was first celebrated at the end of the second or at the start of the third century. St. Clement of Alexandria (+215) mentions it in his works. The Apostolic Constitutions, a work of the fourth century, also speaks of this feast. In the third century,  Hyppolitus of Rome and Gregory of Neocaesarea mention it. In the fourth century Gregory of Nyssa and John Chrysostom preached about it.
The biblical story of the Baptism of Jesus is recorded in all four Gospels and became the most important of God’s manifestations because this event inaugurated the great ministry of  Jesus. It was after His baptism and the murder of John that Jesus began proclaiming the message originally preached by John: Repent, for the Kingdom of God IS at hand.
God’s real presence in    creation and, especially, in humankind, was made known through the baptism of Jesus. We see from history that God constantly tried to make Himself known. His total manifestation was, we believe, made through the Person of Jesus, the Christ. Let us celebrate  that God IS with us.