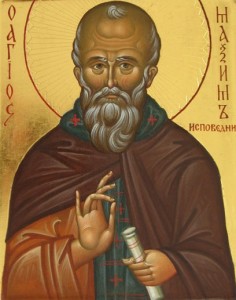 I ended this article in the last issue of the Bulletin by expressing the fact that Maximus, in expressing his understanding of the person of Christ, did not imply any absorption of humanity or any lessening of the properly human, created energy and potential, but a fulfillment of the human being, because this union is a meeting of the living god and the creature in a communion of love – not a merger or confusion of impersonal essences. You, my readers, have heard me on more than one occasion assert, together with Maximus and Cyril and the other Fathers of the Church, the human nature of Jesus, the Christ, was not ruled by His divine nature. This is the wondrous mystery of God’s incarnation.

The doctrine of deification, as understood by Athanasius, the Cappadocian fathers, Cyril, or, finally, Maximus, is not based on a limited or narrow understanding of Christology. It reflects the true trinitatrian “economy of salvation,” and particularly the economy of the Spirit. What the role of the Holy Spirit in the mystery reveals is that deification “in Christ” is necessarily the result of a freely accepted new birth in the Spirit. According to Maximus, Jesus himself has taken this choice in his humanity. Of course, the doctrine of hypostatic union implies that the subject of the choice was still the Logos, not a separate human individual named Jesus, but the choice was “human”.

This all says this: Jesus, although one of the three Persons of the Trinity, freely chose, as a human, to actualize the human potential to come to a deeper union with the Godhead. So, as a human, Jesus chose to live the way that He did so that He could truly reveal to us how to think and behave. If He did not have a choice as a human person, we could never imitate Him and God would be calling us humans to an impossible task. That is something that God never does. His grace is always sufficient for us to accomplish the tasks presented to us by life and also to be successful in meeting the challenges of life. The challenge of this earthly life – Theosis – is not an impossible task or challenge. Humans have the ability to work with God’s help (grace) to actualize the real potential we have to be more like Jesus and enter into a deeper are real relationship with God. That is the wonder of human life. God so loved us that He created us with the real ability to freely return His love. It is a matter of our own choice!