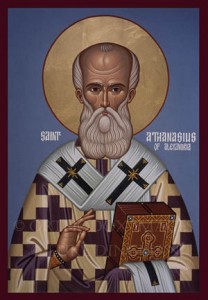 I have been sharing in this article Athanasius’ arguments against Arius. Arius was the proponent of the first and one of the greatest heresies. Arianism, in Christianity, is a Christological concept that asserts that Jesus Christ is the Son of God who was begotten by God the Father at a point in time, is distinct from the Father and is therefore subordinate to the Father. Arian teachings were first attributed to Arius, a Christian Priest in Alexandria Egypt. The teachings of Arius and his supporters were opposed to the theological views held by Christians, regarding the nature of the Trinity and the nature of Christ. The Arian concept of Christ is that the Son of God did not always exist but was begotten by God the Father. Athanasius firmly believed that the errors of Arius and his followers could be laid at the doorstep of theological and spiritual presumption. They are either asking the wrong questions or asking questions that should not be asked at all, questions such as: Why is the Word of God not like our word? How is the Word of God from God? How is he God’s radiance? How does God beget? And What is the manner of his begetting? Asking such questions is much like asking: Where is God? How does God exist? And What is the nature of the Father? It is enough merely to write down the kind of things they say, Athanasius scolds, “to show their reckless impiety. They ask such nonsensical questions as, ‘Has he free will, or not?’ Is he good from choice, of free will, and can he change, if he so will, being by nature capable of change? It is blasphemy even to utter such things.

Such questions cannot be adequately asked or answered because the human mind and its accompanying speech is inadequate for explaining the deep mystery of God. As Athanasius explains, these questions “demand to have explained in words something ineffable and proper to God’s nature, known only to him and to the Son.”

The Arians have forgotten, Athanasius believed, with whom they were dealing, a theological and spiritual shortness of memory that reflects a serious spiritual malady that Athanasius diagnosed as “a lack of reverence and ignorance of God.” When we measure God by ourselves, we will inevitably fall into error. Here the link between theology and worship become immediate and important.

Athanasius argues that Christian worship makes little sense, is indeed blasphemous, if Christ is a creature, however elevated he may be. Yet Christ must be worshiped if the Church is to remain true to the Scripture. “The whole earth,” Athanasius states, “sings the praises of the Creator and the truth, and blesses him and trembles before him.” Righty so. But who is this Creator? Does not both Old and New Testaments point to the Word, the Word now incarnate in Christ?