From the start Greeks and Latins had each approached the Christian Mystery in their own way. For example, when reflecting on the Crucifixion, Latins thought primarily of Christ the Victim, while Greeks thought of Christ the Victor; Latins talked more of redemption, Greeks of deification; and so on. Like the schools of Antioch and Alexandria within the east, these two distinctive approaches were not in themselves contradictory; each served to supplement the other, and each had its place in the fullness of Catholic tradition. But after the two sides became strangers to one another – with no political and little cultural unity, with no common language – each side began to follow its own approach in isolation and push the differences to extremes, forgetting the value in the other point of view.
It was obvious that there were different doctrinal approaches in east and west.  As pointed out, two points of doctrine where the two sides no longer supplemented one another, but entered into direct conflict, were the claims of Rome as the head of the Church and the Filioque. While these factors were sufficient in themselves to place a serious strain upon the unity of Christendom, two further points of difficulty caused the separation to be damaging to unity.
It was not until the middle of the ninth century that the full extent of the disagreement first came properly into the open, but the two differences themselves date back considerably earlier. We have already had occasion to mention the     Papacy when speaking of the different political situations in east and west; and we have seen how the centralized and monarchical structure of the western Church was reinforced by the barbarian invasions. Now so long as the Pope claimed an absolute power only in the west, Byzantium raised no objections. The Byzantines did not mind if the western Church was centralized, so long as the Papacy did not interfere in the east. The Pope, however, believed his immediate power of jurisdiction to extend to the east as well as to the west; and as soon as he tried to enforce this claim within the eastern Patriarchates, trouble was bound to arise. The Greeks assigned to the Pope a primacy of honor, but not the universal supremacy which he regarded as his due. The Pope viewed infallibility as his own prerogative; the Greeks held that in matters of the faith the final decision rested not with the Pope alone, but with a Council representing all the bishops of the Church.

In the last issue of this article I began sharing thought about the birth of Icongraphy. Sometimes the sacraments of baptism and the Eucharist were depicted but usually in a rather allusive manner. Certain scenes from the Old and New Testaments were found: Jonah and the whale, Daniel in the lion’s den, Noah and the ark, Abraham and Isaac, the raising of Lazarus, and the adoration of the Magi. The latter was shorthand for the whole of the incarnation and redemption, and counterbalanced the representation of Adam and Eve, standing for the state of sin from which we need deliverance. Most orf the scenes depict the salvation of individuals in response to their faith and prayer, and correspond to the prayers made for the dead: in the past God has saved these individuals, may he now save those who have died. Other images are less easy to interpret. There recurs the conventional image of the mother and child. But it is not clear whether this always represents Mary and the child Jesus.
The iconography of the catacombs arose in a liturgical setting, that of prayer for the dead. The frescoes at Dura also relate to the liturgy, this time of baptism. Behind the font, which is placed beneath an arched canopy, are Adam and Eve, and, much larger, the Good Shepherd and his flock. They symbolize original sin and the redemption wrought by Christ. The surviving frescoes include the Samaritan woman at the well, Christ walking on the water, the raising of Lazarus, and the resurrection of Christ, shown by means of the three women at the tomb. The healing of the paralytic is there, and so is David’s victory over Goliath. These all point to the victory over evil and the new life and health which baptism confers.
There are no instances known from the third century of Christian decoration of the eucharistic hall. But the images found in the catacombs and at Dura make it clear that the iconography which was later to play so important a part in the decoration of Christian churches, especially in the Byzantine tradition, had its roots in the Hellenistic art of the third century, adapted to express fundamental Christian themes.
One other aspect of late classical art was to become a great importance in the Eastern Christian tradition, both in private devotion and in corporate worship, and that was portraiture. It is quite probably that Christians began painting portraits of distinguished and venerated members very early on. 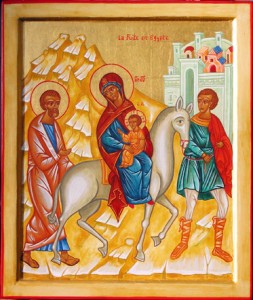